Fall Fun at the Incline 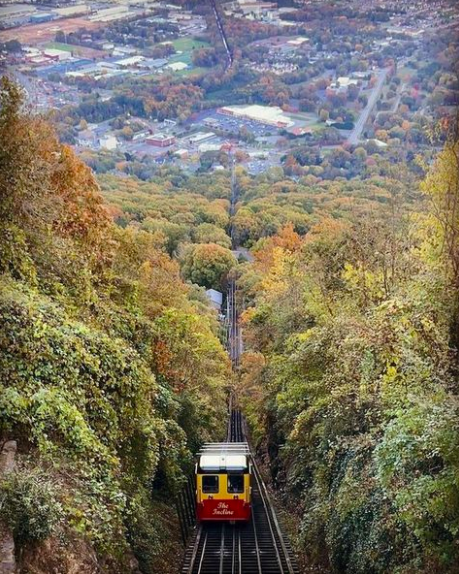 Ride up for the best view of Chattanooga and surrounding fall color.

The fall season blazes a kaleidoscope of color. Driving around to see the sights from your car windows is enjoyable. But you can really ramp up the wow-factor by riding the Lookout
Mountain Incline Railway in Chattanooga, Tennessee.

One of the city’s best-known and beloved attractions, the Incline Railway has been transporting passengers up and down Lookout Mountain for over 125 years. Rides make for happy memories all year-round, but fall is extra special with its dazzling array of color. It’s also just plain fun.

The Incline Railway, built in 1895, ranks as one of the world’s steepest funiculars—a
mountainside cable railway operated with counterbalanced ascending and descending cars.
Billed as “The World’s Most Amazing Mile,” this is an autumn experience that you don’t want to miss. Be sure to bring a camera!

The base station is located in the historic St. Elmo neighborhood. The Incline’s designated
parking lot positions you a short stroll away from the ticket booth. At most you’ll wait only about 20 minutes before a car arrives at the station. Each trolley-like car can comfortably seat 42 and is wheelchair accessible. With theater-like stepped seating and huge windows spanning each side and roof of the car, any seat is a great choice!

Ascending is a thrill as the Incline Railway climbs the steepest part of Lookout Mountain at a 72.7 percent grade! There’s a sense of flight as you rise and the base station slips from view, but the car never leaves the track while gliding up between trees. The 10-minute ride is smooth and moves at a steady pace—you won’t feel rushed. There’s a feeling of being pulled up the mountain backwards since seats face the point of departure rather than the destination. From inside the car, every direction you look is a vantage point unique to the Incline Railway.

At the upper station, the mile-high view from the observation deck is the highest on Lookout Mountain. From here you can see a panorama of the city of Chattanooga, the Tennessee River, and the Appalachians. Cue the oohs and aahs! Binoculars stand ready on the platform in case you want to take a closer look at anything intriguing in the distance.

Visit the upper station’s lower level for an inside peek at how the Incline Railway operates.
Through a glass wall you can see straight into the engine room to watch the cable traction system in action as it maneuvers the railway’s cars up and down the track.

Don’t miss the Centennial photo exhibit on the upper station’s main level to see how the Incline evolved over time. Several interesting facts are revealed, including that the railway operating today is actually the second built on Lookout Mountain. The first opened in 1877 but closed in 1899 primarily because of the success of the second line that opened in November 1895.

The upper station is a short walk from Point Park, a ten-acre memorial park that’s part of the Chickamauga and Chattanooga National Military Park and overlooks the Lookout Mountain Battlefield and city of Chattanooga. A paved path links several historic tablets and monuments. Lookout Mountain is the southernmost extension of the Cumberland Plateau, separated by the Tennessee River, and ranks as one of the world’s most biologically diverse ecosystems. Its variety of plants and trees deliver an impressive fall show of color.

Before departing, visit the gift shop to snag a souvenir. Then board a railcar to ride down the mountain. In this direction, there’s a sensation of sliding down the mountain since the car faces its destination.

At the base station treat yourself to something yummy at the Clumpies scoop shop. Widely
considered some of the best ice cream around, many flavors are available—all scrumptious!
Make your fall spectacular: Take a ride on the Incline Railway, the most relaxing way to reach the summit of Lookout Mountain for an eye-popping view.

After your ride, there’s no need to head straight back home. Two more Lookout Mountain
attractions are nearby: Ruby Falls, the nation’s tallest and deepest cave waterfall open in the public; and Rock City, which boasts rock formations, gardens, and a “Seven States” view. For more ideas and help planning your trip, visit LookoutMountain.com.